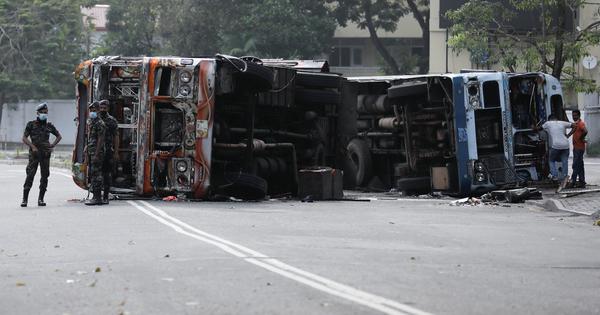 Rajapaksa had to be taken to an undisclosed location on Tuesday after thousands of anti-government protestors attacked his official residence overnight, The Guardian reported.

On Monday, Mahinda Rajapaksa had resigned from his post amid protests due to an unprecedented economic crisis in the island country. He handed over his resignation to President Gotabaya Rajapaksa.

On the same day, chaos ensued in the country as at least five persons, including a ruling party MP, were killed and homes of many leaders were attacked in clashes between supporters of Rajapaksa’s party and anti-government protestors.

Sri Lankan authorities also imposed a countrywide curfew and deployed the Army to curb the protests.

“After a pre-dawn operation, the former PM and his family were evacuated to safety by the Army,” the security official said on Tuesday. “At least 10 petrol bombs were thrown into the [prime minister’s] compound.”

Security forces had fired tear gas shells and warning shots to disperse the protestors but were unable to control them at the three entrances of Mahinda Rajapaksa’s colonial-era building named Temple Trees.

Meanwhile, United States Ambassador to Sri Lanka Julie Chung condemned Monday’s violence against the protestors and asked the government to conduct an investigation into the incidents, AFP reported.

Hundreds of protestors have been holding sit-in demonstrations outside Gotabaya Rajapaksa’s home since last month as Sri Lanka plunged into public debt, leading to its worst economic crisis since its independence in 1948.