More than six weeks after the Russian siege began, Ukrainian troops are continuing to put up a staunch resistance against invading Russian forces amid the ruins of Mariupol, a strategic port city that Vladimir Putin has his eye on.

With Mariupol proving to be a holdout territory, Putin is augmenting the might of the Russian military with the addition of Chechen fighters. Reputed to be fierce warriors, Chechen forces sent to Ukraine are yet to play a significant role. But that may soon change, as India Today learnt during a visit to a top secret Chechen base camp.

Murad was referring to Russia’s wars in Chechnya in the wake of the collapse of the Soviet Union. The Muslim-majority republic fought for its independence from Russia in the mid-1990s, but was engulfed in a decade-long bloody conflict when then Russian prime minister Vladimir Putin sent troops in Chechnya after deadly bombings allegedly carried out by Chechen secessionists. This ultimately culminated with the installation of Moscow-backed presidents in the restive province.

The Chechens have gone from fighting the Russians, to now fighting with the Russians. As Commander Murad said, they take orders not only from their leader Ramzan Kadyrov, but also from Putin. As if in testimony to this fact, their base camp at the Melitopol hotel has flags of the Chechen Republic and the Russian Federation hanging side by side.

Chechen soldiers at the secret base said they trained in a place called Hankala in Chechnya. They were then sent for further training in Crimea, which was annexed by Russia in 2014, before entering Ukraine. They are armed to the teeth and have firm conviction in their leader, Ramzan Kadyrov.

As for what they intend to do in Ukraine, Ramzan Kadyrov has given a fair indication. In a video posted on his Telegram channel on April 11, the Chechen president declared that Russian forces will launch an offensive not only on the besieged city of Mariupol, but also on Kyiv and other Ukrainian cities. 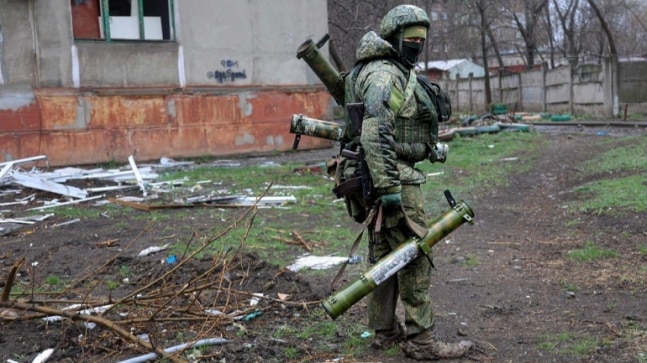